If you’re like most people, food is something you get a lot of enjoyment from and even more so when you’re challenging yourself physically, so no doubt you’re wondering ‘What will I eat at OB??’

A focus on quality and flavour

Outward Bound is all about inspiring people – and why not in the kitchen as well? Our food must be nutritious. People are doing so much physically that they need to be energised, so a balanced meal is the key.

Equally important though is flavour! There is so much engineered food now. Giving people real food with real flavour is where it’s at for me as a chef. A lot of the people we see are young and don’t cook or know how. I want to inspire them to give it a go: ask for recipes and think what they can do when they get back home.

Cooking should be fun and eating together is a pleasure that I want to nurture. For me, if they can go home and cook one night a week, encourage eating at the table without devices and have a conversation with their family then I’ve done my job! Dietary requirements are the norm now and at Outward Bound we want people to feel comfortable about it. A lot of people now have dietary requirements due to health issues and others make a conscious decision to change their diet. Either way – most things are not a problem.

Gluten Free, Dairy Free, Vegetarian and Vegan are all catered for from the OB Kitchen.

Unfortunately due to our remote location and product cross contamination, we cannot cater for students with coeliac disease or those who are likely to have an anaphylactic reaction as a result of a peanut allergy. Severe allergies however are dealt with on a case by case basis as part of our student screening process.

Marcel was born in 1966 and raised in the Netherlands, number 8 out of 9 children. He grew up living above the family bakery, which has been in the family for 6 generations. Marcel knew from a very early age that he wanted to become a chef and was hugely influenced by his mother. She is a remarkable cook.

Marcel went to a trade school from the age of 12 where, amongst other things, he studied food and wine science. He then went on to become an apprentice chef finishing his study with the Michelin rated De Bokkedoorns restaurant.

Marcel travelled to New Zealand in 1986, aged just 20 years where his first position was at Plimmer House, Wellington. Later he moved to Christchurch to Grimsby’s, a fine dining restaurant which went on to win best South Island restaurant. He then went on to join the Christchurch Park Royal team as a Sous Chef. It was also here that he met Helen, his wife who is also a member of the OB catering family.

In 1992 they moved to Blenheim where he and Helen ran a variety of restaurants spanning almost 20 years.

Helen and Marcel decided to move to the Marlborough Sounds and have been fortunate to continue exploring their passion for food at Outward Bound. Marcel loves welcoming people in to his kitchen and hearing their stories.

Feeding all these beautiful people is a privilege that I will never tire of.

When not creating delicious dishes for our students, you'll find Marcel either singing in his garden or with a hammer or a paint brush in hand! "My favourite thing at the moment is my herb garden – it’s loving all the sun. My next project is a hangi pit!" The Famous OB Flapjacks – a staple on any exped or solo. Check out the recipe below! 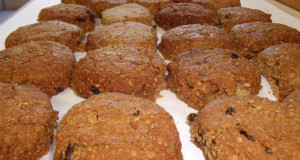 Missing some Anakiwa flapjacks? Get the recipe here! Read more