While businessman Dick Hubbard sold his cereal business in June, 2018 also marks the year he steps down from the board of Outward Bound Trust of New Zealand and as chair of Project Refresh Anakiwa – a three year campaign to raise $3 million enabling an upgrade of the outdoor school in Anakiwa in the Marlborough Sounds.

Dick says the lessons he learned when he attended a course in 1964 as a fresh-faced 18 year old, saved the cereal company from collapse.

“Outward Bound in my opinion saved Hubbard Foods in its fledgling years. Let me explain. The first two years were rough - very rough. We came close to possibly losing the company not long after we started I believe it was the lessons from Outward Bound about perseverance, mental toughness and pushing the personal limits that got me through those first few years. It would have been oh so very easy to have given up in our darkest hour.

“After the company had been going for about five years I tentatively offered two Outward Bound Scholarships through the newsletter that we put in the cereal boxes. Doing this went against all marketing norms of the time. However the response was absolutely overwhelming with about 5000 entries, often with lovely stories attached.

I realised then how the Hubbard’s philosophy of business with a social responsibility was linked to the values base of Outward Bound.

Two years later I was asked to join the Outward Bound board for a three year term. Twenty two enjoyable years later I am now stepping down from the board.”

Then came the launch of an Outward Bound named breakfast cereal.

“Hubbard’s and Outward Bound have a lot in common and we have the same values. This was so apparent in the early days that it made sense to launch an Outward Bound cereal. Sales from this cereal have raised about $2 million in sponsorship money from Hubbard’s to Outward  Bound - something I am personally very proud of,” says the ex-mayor.

At 18, sponsored by Paeroa’s only doctor, Dr Bartrum, Dick made the two hour bus trip from Paeroa to Hamilton.

“Then it was an overnight trip travelling second class on the Limited Express to Wellington. Who can forget that mad refreshment stop in Tauramanui at midnight! Then if that was not enough to finish one off, it was on to the 10am once-daily sailing to Picton on a very new and the very first roll-on-roll-off Wellington to Picton ferry called the Aramoana. Then the small boat trip to Anakiwa arriving bleary eyed, travel jaded and not a little apprehensive as a nervous 18 year old.

“I have the clearest memory of arriving in Anakiwa. It was raining. I was ready for a rest. No way!  Thirty minutes later we were on the quad and into the work. Twenty two days later I was able to slow down. That full-on experience right from the moment of arrival is signature Outward Bound even today.”

In 1964 Outward Bound had been running two years out of an old guest house that had been converted to its new base. Dick recalls a disused bar in one corner (“Dry I might add - we checked it!”). He says back then the hills were twice as high as of now, the rivers twice as swift and the sea twice as cold.

“But I am pleased to report the open cutters that we so joyously sailed on the Queen Charlotte Sound are the same today as they were then.

“Anakiwa is a very special place where the soul of the Outward Bound experience resides. It is important that we are appropriate guardians of this special site and that includes looking after the very hard working physical assets on site. As we go into 2019 and beyond, we need to raise the money to not only maintain but appropriately future proof the facilities at Anakiwa.”

“It had just as big an effect on her as me and also gave her a love of adventure. Some six years ago we started riding around the world on our motorbike and we have now travelled about 180,000 km two-up - Diana as pillion passenger - visiting 63 countries. We believe we are the oldest couple in the world to have travelled two-up around the world on a motorbike. Next year we travel by motorbike from Japan to London via Russia and the Silk Route countries. We do it as over 70 year olds. So the love of adventure, once seeded, never stops growing.

“You are never too old to have adventures. Outward Bound of course does not guarantee or even promise eternal youth. But it certainly fosters it, encourages it and helps fulfill it. I have so many thanks to Outward Bound for what it has done for me and my life.” 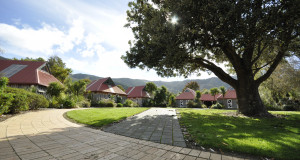 Anakiwa - for those of us who have been fortunate enough to ‘do’ an Outward Bound course the word Anakiwa is not just a place name, its the soul of Outward Bound. Join us in restoring and refreshing this special location that means so much to so many. Read more