Arthur Tompkins clearly doesn’t do things by halves: a district court judge, art crime specialist and eight-time Coast to Coast competitor, it's no surprise that he has also completed three OB courses over 40 years! He kindly shared his unique journey with us:

FOUR AND A HALF DECADES ... THREE OB COURSES ... ONE STUDENT.

It's late 1978, I'm aged 18, and finishing my second year at Canterbury University. The Bastion Point occupation has ended, Robert Muldoon is Prime Minister, and Abba is topping the local charts.

A university friend, who had been to Anakiwa earlier that year, sold me on doing Outward Bound. So in early December, after university exams were all done, I travelled overnight on the train from my home in Hamilton, stayed a luxurious (in retrospect) night with my grandmother in Wellington, then crossed to Picton on the Interislander.

We were ferried to Anakiwa on the OB launch in awkward silence, more or less, and then we met our instructor on the wharf. He walked us to our watch-house. No waiata, no pepeha, just "dump your bags, get your tramping gear on, and meet me outside in 5 minutes. Bring a hat.

We were going, apparently, on a "short walk". That turned out to be a 4 hour climb up to the ridge to the north of the school, right around the encircling ridge, and then back down the beach. Someone said, to make going uphill easier, shorten your stride and increase the number of your steps - or something like that. It didn't seem to work for me.

Outward Bound all those decades ago was fairly close to a military boot camp, with no or very little time or opportunity for relaxed talk or inner reflection. One memory that has endured through the decades, however, was the importance placed right from the first day on collective watch punctuality. Lateness to PT was rewarded with many sets of extra push-ups by the whole watch, or a lap around the school. Or both. We soon got that sorted.

Arthur (front row, first from right) and his watch, Rutherford 170

Our gear was nothing like what we have available now. Chafing-ready cotton rugby shorts, itchy Norsewear woollen vests, checked Swanndri wool bush shirts, and handknitted (by our mums, I suspect) beanies. No quick-dry, merino or breathable fabrics anywhere to be seen. The steel-framed canvas packs were heavy and not all that waterproof. Just like the steep-capped leather tramping boots. I was the proud owner of a new and very modern pair of NZ-made (Lazer brand, perhaps?) new-fangled waffle-soled running shoes. But they didn't make the frequent runs any easier!

My friend had given me one piece of sage advice - pick a bottom bunk, because sometimes you'll be so stuffed that you won't be able to climb onto the top one.

Great advice, as it turned out, which I followed. And I was repeatedly pleased I had. The school was an ad hoc collection of white weatherboard buildings, and our watch-house, tucked in behind the main block, was well-loved and homely. There was, it turned out, quite a lot of informative graffiti around my bunk (along the lines of "Hang in there, you'll make it. Eventually. Count the 23 1/2 days down").  Back then, as now, the food was wonderful. My uncertain memory tells me that the head chef was a lovely woman named Audrey, who produced vast and delicious meals whenever we turned up (always on time) to eat them.

The main schemes were pretty much the same as they are now: I don't really remember the Confidence Course, although I'm fairly sure we did it. The rock wall - definitely. Bush One, sailing, kayaking (although no spray skirts, and rigid fibreglass kayaks: we paired up - as your partner went through a rapid, you perched on a nearby rock ready to dive into the river and flip them back up if they tipped over), service (some tree planting and goat-proof fencing, on Arapawa Island I think, and some ground maintenance at a local primary school - in Havelock, maybe?).

Solo (pretty much the same then as now, except we were delivered to our spot by launch at night, and climbed down an aluminium ladder lashed to the bow as the instructor playing the launch's spotlight on the rough track up to your spot. We were encouraged to fast for the duration).

And then the finale, Bush Two - "We're here. You need to get to there. Work out your own route. See you in three days". We didn't quite get to "there", due to a nasty sprained ankle as it happened. But we almost did. 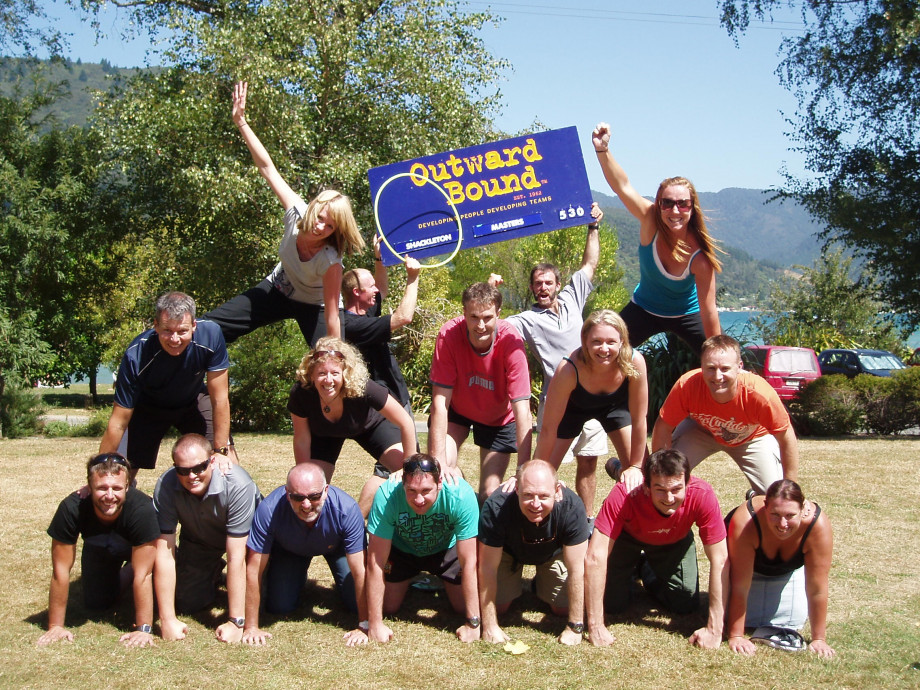 Arthur (bottom of pyramid, third from left) on Masters course in 2009

By then single-gender watches were a thing of the past, the school had been completely rebuilt, and if Anakiwa was still mostly a boot camp, it was now a slightly kinder and thoughtful and more self-reflective bootcamp.

Punctuality was still a thing, especially and always for morning PT, and the watch was far more varied in terms of ages and stages, life experience, fitness levels, and useful (especially culinary, I remember) skills than my 1978 iteration had been. We were all enthusiastic, reasonably fit (although one watch member did confess, after a day or so, that a gentle lunchtime run around Oriental Bay twice a week turned out to be not really sufficient...).

Our gear was far better, dried quicker (although often not completely), and was much lighter when wet - which, it turned out, was often. We were a cohesive bunch, we worked well together, we talked a lot, and we managed to use our varied skillsets effectively. We had a blast. 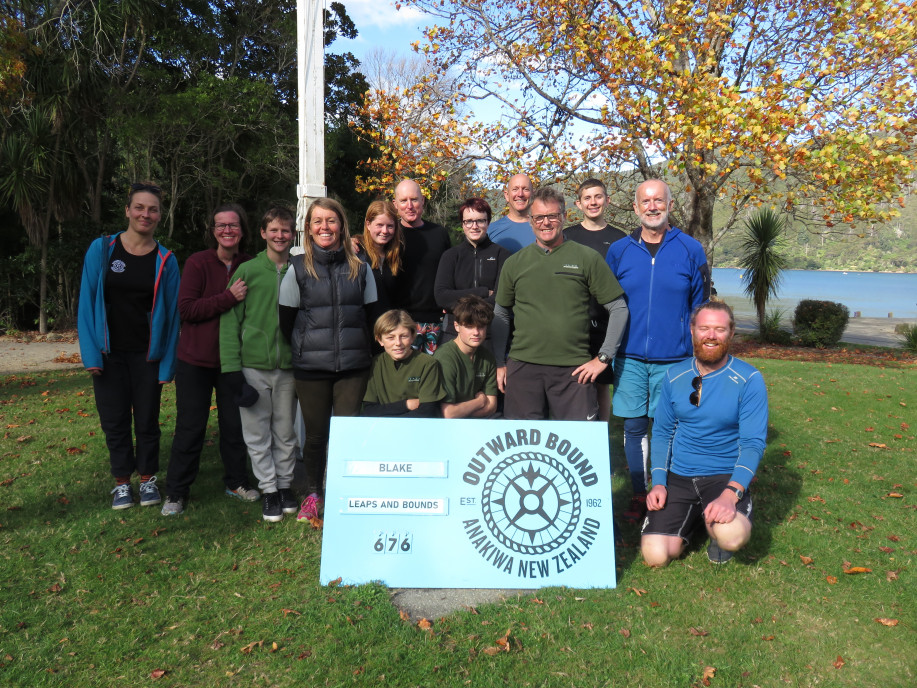 And so to 2021. This third time around it was an 8-day parent and teenager (in my case our daughter) Leaps & Bounds course. Quite a different and productive watch - dynamic, given that we were a collection of pairs, each pair bringing their own pre-existing relationship to the watch. It was not a "no-one knows me here, and no-one knows anyone else here either" situation on the first day. As one of our perceptive instructors put it, Outward Bound is still a thorough-going boot camp, but now run by hippies. Lots of time and opportunity for valuable and instructive reflection, for discussion, for round-the-campfire musings.

The cutter still didn't go to windward much (or at all, really) and was still uncomfortable to sleep the night on. The view from up on the ropes course looking down was still much scarier than standing on the ground looking up (the Flying Fox was, as always, a lot of fun). The morning run had not gotten any shorter, and getting the whole watch, teenagers and all, organised and to wherever we needed to be on time was still a challenge - one that, by the end we usually met.

There was new stuff too - getting the waka ama to go in a straight line presented an unexpected and rewarding challenge (after a few unintended circles), and coasteering (on my and my daughter's shared birthday) was literally a new and exhilarating leap into the unknown.

Solo was, as ever, a real highlight - helped by clear, still weather and visits from one or two passing and inquisitive members of the local fauna. Again, we had a blast!

At Anakiwa much is still the same, and much has changed. The impelling into experiences, the challenges of living and working quickly and closely with a bunch of strangers, the staying in the moment, the sense of being removed from the outside world whilst experiencing your world more acutely, the thrill of getting to the metaphorical or actual mountaintop not quite sure how you all made it together and in one piece, the sheer physicality of getting through each day. All that is still the same and still just as intense and just as rewarding.

The many opportunities to reflect and talk and question and wonder were, in both 2009 and then in 2021, challenging and memorable, and enriched the Outward Bound experience significantly.

The instructors continue to impress with their patient and creative attention to each individual watch member's needs, concerns and challenges, and their unwavering commitment to all aspects of safety.

I think we all left with strong memories and strengthened bonds.

Is there a fourth course in prospect? I don't think so. But you never know ...