This month we catch up with Josh MacMillan. Josh was lucky enough to receive a scholarship from Otago Community Trust to attend a Mind, Body, and Soul Course in October.

How were you feeling at the start of the course?

After getting the train to Picton, I quickly found myself on a boat with 60 strangers. I wondering what the heck I had signed up for and was very apprehensive about what lay ahead.

What Watch were you put into?

Kupe Watch, it consisted of 6 other guys and 6 girls. We were told our Watch was named after the first Polynesian who was said to have discovered New Zealand. We were quickly known as the fastest eating Watch, finishing well before some of the others had even started dessert.

Did it take long for your Watch to become mates?

Not at all. Our first team exercise was a two day off track tramp up two fairly serious peaks in the Marlborough sounds. The whole tramp was spent talking and telling stories from home. It made the time go faster and gave everyone the chance to get to know each other. We decided that calling ourselves a Watch was too formal and it quickly changed it to mob.

What did you enjoy the most?

PT! It was a good wake up in the morning, especially the refreshing jump in the sea and cold shower afterwards. For many PT wasn’t a thing they looked forward to at all, but for me it was the thing I enjoyed the most.

What was your most satisfying moment on the course?

Winning the half marathon at the end of the course, the first one I had ever run in. Early in the race three of us were up front, but when we came to the hill section I managed to take off.  I was able keep the lead till the end, finishing in 1 hour 33 minutes - winning by only 30 seconds.

How would you describe your experience?

It’s been the most challenging and rewarding 21 day of my life so far. I met some great new friends I will have for life, had many amazing experiences, gained a lot of confidence and learned some valuable lessons.

When I got home from OB I applied for the head boy position at Kaikorai Valley College in Dunedin. After speeches, interviews and staff and pupil voting I was announced at a recent prize giving as the school’s Head Boy for 2015. Without the Outward Bound experience, I don’t believe I would have had the self-belief and confidence to even go for the position.

Do you know a teenager who could benefit from Outward Bound?

The Mind Body Soul course offers 16 to 18 year olds the full Outward Bound experience. Held over 21 days, it’s perfect for students who want to take time out to discover their true values and gain clarity for the future. Josh devising his strategy for the high ropes Time for a spot of rock climbing 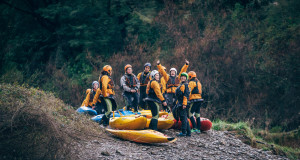 A 21 day adventure for 16-18s. Build the skills and confidence to make the most of your final years at school or to take the next step in life.