Say hello to Blake and Huria! An additional 335 students will be able to experience Outward Bound each year with the official opening of a new double watch-house designed by architectural designer and OB alumni Marg Robinson.

The two new watches are named ‘Blake’ - after the late Sir Peter Blake as voted by the public, and ‘Huria’, a name chosen by local iwi Te Ātiawa, after Huria Matenga the respected leader and land owner in Nelson, Taranaki, and Porirua.

Since 1962, more than 60,000 people have slept in four Outward Bound watch-houses at the school in Anakiwa. A place for students to relax, reflect and hang out with friends before and after their activities, the watch-house is an integral part of the OB experience.

Part of Project Refresh Anakiwa, a three-year $3million fundraising campaign to upgrade the school’s facilities, the watch-house’s $870,000 cost has been met by private and public donors.

Project chair and long-time supporter of Outward Bound, Dick Hubbard, says the lessons he learned when he attended a course in 1964 as a fresh-faced 18 year old, have remained with him for life.

"Perseverance and finding inner strength resonate as strongly today as they did then. The opening of this new watch-house will help more people of every age and stage get the opportunity to attend Outward Bound and the chance to help shape their lives in a very positive way and help set them up for success. It’s a momentous occasion," he says.

OB’s environmental policy was taken into account for the watch-house’s design brief, featuring elements such as a 100mm thick layer of polystyrene under the concrete slab to reduce heat loss, double glazing, LED light bulbs and a heat pump water heating system to replace older technology.

It is important that any development to the school is done in line with our kaupapa and our core value of kaitiakitanga - respecting the interconnectedness of our world, preserving and protecting the natural environment for future generations.

"We have also kept some of our tried and tested ‘old’ green features of our older watch-houses and installed them in this new building including the passive solar clothes drying area and our drying rooms now have heat pumps which reduce on-demand energy consumption by over 300%," adds Simon.

In addition, 24 solar panels have been installed on the roof’s north side, creating photo voltaic electricity all day long. A display board being installed in the house will educate students of their home’s solar output usage while in the house, and any exported wattage to the main switch board to power the rest of the school.

The first students to occupy the new watch house will be those taking part in our Explorer course during the October school holidays. 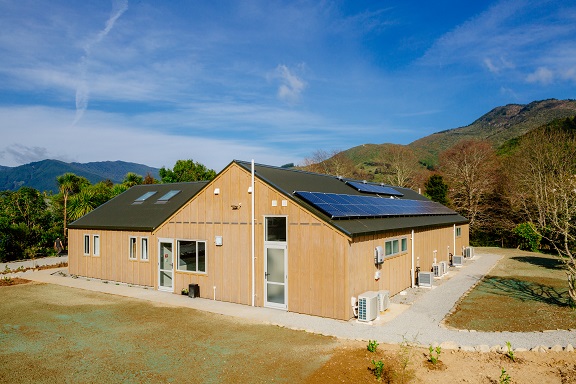